A Music Festival managed by Saint Louis to show its best talents to the audience, enriched by Special and International Guests

“This is the new world, returned by its youngest artists, in phase with the vibrations of our time, a-synchronous interpreters of a social reality that every day belongs to them and less and less to previous generations, in an evolutionary projection that must inevitably express intents and ideals”.  (Stefano Mastruzzi, Artistic Director)

Jammin’ is a Music Festival, managed and promoted by Saint Louis, dedicated to emerging groups and to the discovery of new talents in every music filed, now reaching its 17th edition. One he prestigious stage of Auditorium Parco della Musica of Rome. The Festival, under the artistic direction of Stefano Mastruzzi and Francesca Gregori, over the past 17 years promoted young experimentation ai International level and the best emerging Italian artists, giving space to the most varied music offer and sound universes.

For the current year, too, a careful selection brings to the stage very young artists, jazz musicians, song-writers, producers, composers and authors who perform, during different evenings, presenting their original music project, alongside extraordinary established artists such as Serena Brancale and Natalie Mangalavite.

Telemagenta
Experimental project where electronics merges with Soul and Downtempo sounds, without losing the song form of the great songwriters it is inspired by. Born from an idea of ​​Giorgio Leone, guitarist and composer and Gilda Noel Cristante, singer and songwriter, the sound comes to life on a balance of electronic elements and vintage sounds, built on loops, maintaining popular music as a reference point. With them on stage there are Marco Motta (drums, electronic pad), Valerio Carbone on bass, Daniel Mastrovito keyboards, synths and Lucio Mastroianni on electric guitar.

Laura Delle Rose
The young Salentine singer-songwriter presents “Expectations”. A project born a bit by chance, a bit like a game. Songs that come to life in a mix of electronics and soul, pop and songwriting. Accompanying Laura in this challenge: Marco Murrone and Valentina Ramunno piano and synth; Gabriele Petrillo on bass, Michele Santorsola electronic drums, Federico Campanello guitar. In the guise of producer and guitarist Domenico Lorusso; and finally Giorgia Gruppuso, Andrea Aielli and Emily Castagna on back vocals.Alexjem Project
The 80s are back, but with new sounds, more round and surrounding. Alessandro “Alexjem” Lamoratta, born in 1983, guitarist and composer, presents Arcade. ARCADE is the nostalgic representation of a hypothetical 8-bit video game, where electronics and guitar riffs coexist perfectly in a dimension of their own made up of futuristic and almost alien sounds.

NeuF
The project was born in 2018 from the meeting between Davide Conti and Domino Spada. Linked by a deep music understanding, they quickly began an intense compositional activity and decided to broaden the formation by involving Mattia Piscitelli, Francesco Angiolini and Vincenzo Quirico, performing in various venues of the Roman scene. The five musicians, although coming from different musical realities, decide to give voice to their ideas creating passionately original compositions of jazz matrix, with an attentive eye to the mingling of genres. 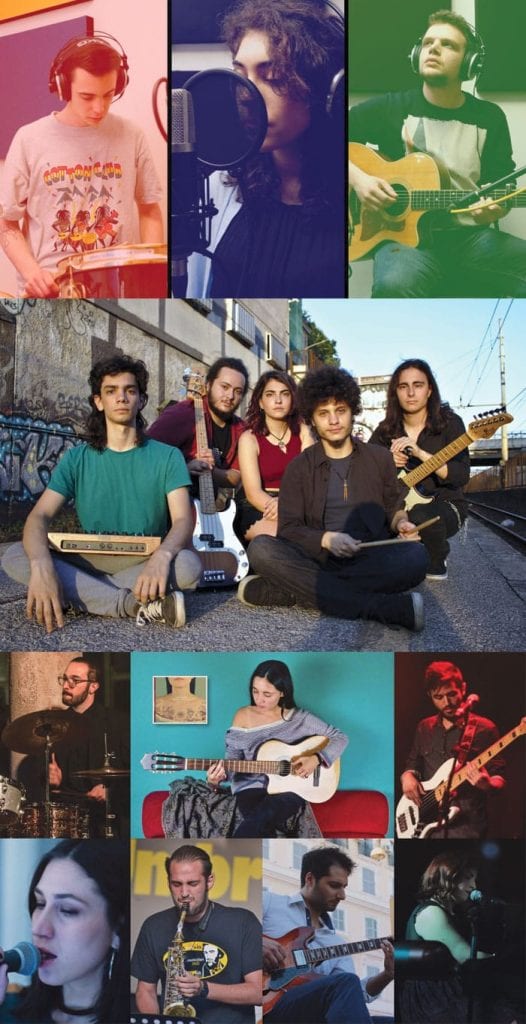 ArtUro is the new recording production by Saint Louis dedicated to new music talents. The creativity of the best students of the historic Roman school of music undertakes new music paths and new sound experiments. Original music projects born from a single inspiration and transformed into artistic productions by a team of young songwriters, arrangers, sound engineers and performers.

Bartenders
The group was born in 2016 from the collaboration between the drummer Mattia Mauttini and the acoustic guitarist Davide Mariuzzo. Since 2017, the voice of Elena Brandes completes the alternative sound of the trio, from which indie, pop and progressive influences emerge. The common thread of the band’s compositions is a constant search for new abstract and introspective sounds.

NooM
is a Roman group composed of Lucrezia Cesaroni (Vocals), Francesco Ciancio (Guitar), Diego Carrubba (Drums), Marcello Tirelli (Keyboards) and Davide Gabrielli (Bass and Synth), active since 2016. Their first concept album will be released soon under the title “of Lady, Lord and Knight”. 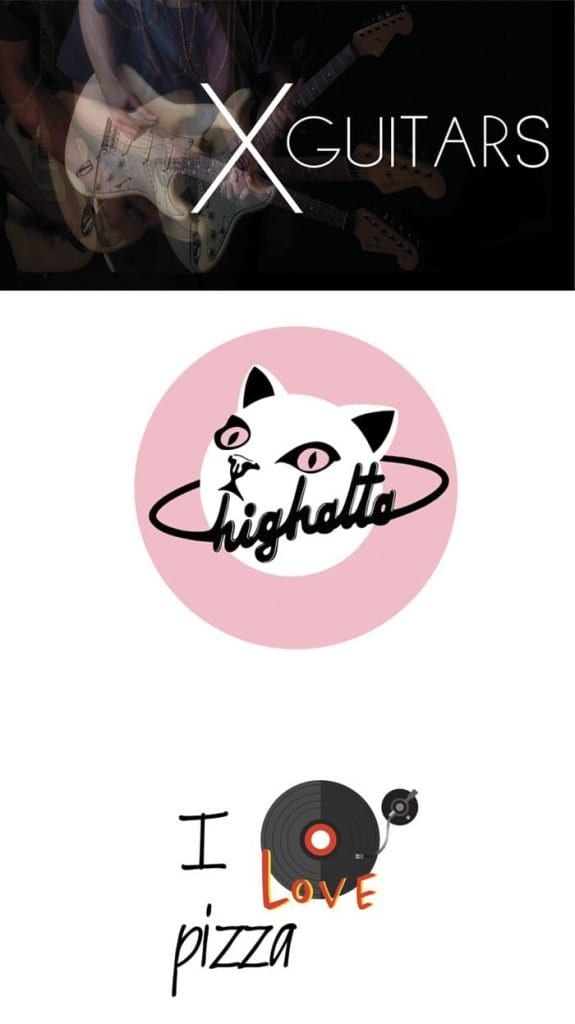 Highatta
Music reality born in 2018 within the walls of the Bdr Studio from an idea by Federico Murgia and Daniele Ferreri with the aim of revisiting in a modern key the swing and jazz sounds through the use of drum machines and loop stations. Playing without fixed structures and freely expressing one’s own musical thoughts are the basic rules of their music. From the improvisation a repertoire mainly born of new soul / jazz / funky was born, both instrumental and enriched by melodies and vocalizations. With Flaminia Lobianco (vocals), Federico Murgia (guitar), Emanuele Bono (keyboards), Aurelio Tarabella (bass), Luca Taurmino (drums).

ILoVePiZzA
Italy? Oh, I love Pizza! Pizza as a breaking point and a meeting point between American soul and Italian pop. Eight young people passionate about jazz and electronics in continuous experimentation, they engage in original arrangements using loops, synths and sequences. From E.W. & F. to Subsonica, from Rosalia to Robert Glasper. A musical project that is a bit out of line and at the same time consistent with today’s music, led by the creative talent of Serena Brancale. With the voices of Flaminia Lo Bianco, Elisa Tronti, Francesca Carbonelli, Alessandra Formica (vocals and guitar) and Matteo Bussotti on drumpad, Dalila Murano on drums, Nico Rutigliano on bass, Alessandro Passi on piano and synth.

X Guitars
Original band composed exclusively of electric guitars that reinterprets the repertoire of the history of Italian and international rock through the riffs of the greatest artists. Ten guitars on stage that play, explode, harmonize and converse. A new wall of sound. The collective is led by Diego Cignitti. 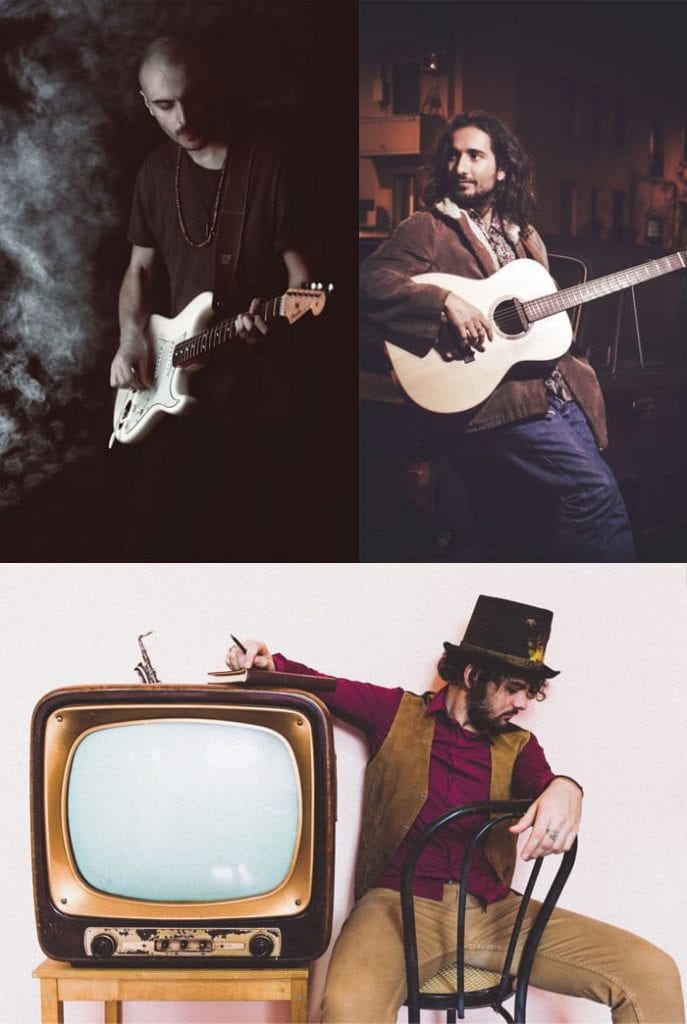 Porthos
The songwriter Giuseppe Pugliese, aka Porthos, focuses his style on the synergy between text and music, searching for the most inherent and significant sound, arrangement and composition for words expressed. For this reason, the styles vary depending on the text in order to leave a thought in the listener, finding themselves for 3 minutes in a world where they can recognize themselves, living it with an emotion.

Matteo Cappella
Young singer-songwriter, born in Rome and raised in Bellegra, in 2012 he returns to his hometown by coming into contact with different musical realities of the Capital. Between the countryside and the city, songs and concerts, verses and noises, in January 2019 he publishes his first recording work Metropolia, a “Context Album”, a walk through the streets of a new city, the mapping of 8 districts of the metropolitan spirit. Metropolia is the city and each piece is a neighborhood with its characters.

Cigno
CIGNO is the pseudonym of Diego Cignitti. Roman musician and songwriter. In his live performance he takes root in the blues and rock influences with which he trained as a guitarist and mixes them wisely in pop atmospheres, finding inspiration in what was the “sixties” music scene. His sound flies and is enriched by an underground poetry typical of the independent Roman reality. His live takes place in the contemporary, fluctuating in rarefied atmospheres “Vapor Wave”. 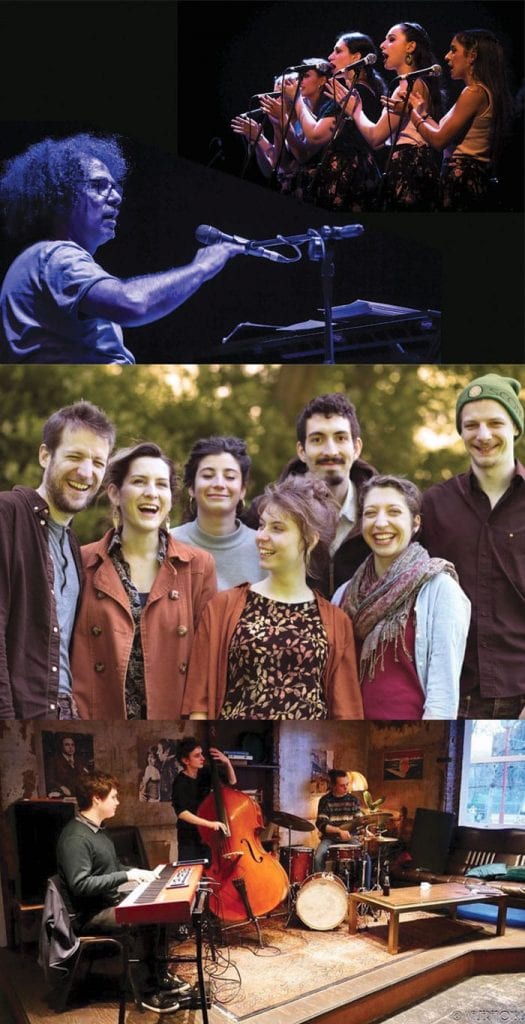 Milan Verbist Trio
The trio consists of three students from the Royal Conservatoire of Antwerp: Milan Verbist (piano), Jef Manderveld (double bass) and Simon Van Brandt (drums). The main sources of inspiration are the musicians of the fifties and sixties such as Phineas Newborn, McCoy Tyner, Paul Chambers, Charles Mingus, Elvin Jones, Philly Joe Jones. Their repertoire ranges from standard jazz to hard bop and original compositions. In Belgium they play assiduously in various jazz clubs and participate in important national events such as Klara in deSingel and Zomer Van Antwerpen.

Aishinka
Winner of the B-Jazz International Contest 2019, the ensemble consisting of three female voices, soprano sax, piano, bass and drums explores musical communication through world music. It was friendship and the common musical sensitivity shared with Emmanuelle Duvillard that inspired Louise Andri to develop a repertoire that brings together different cultures and music expressions but is mainly based on traditional Bulgarian songs revisited with the freedom to improvise jazz, with the intent to pass on the musical memory transmitted by the old generations, making it evolve in today’s world. Hence the name Aishinka, which in Japanese means “love of evolution”.

Latin Luis Combo
A music project dedicated to the free world of Latin-jazz contamination, born within Saint Louis and directed by the pianist Natalio Mangalavite. A large orchestral staff proposes a repertoire of experimentation, combining jazz with Latin and South American rhythms and languages.